Black Adder 11 - The Elizabethan one 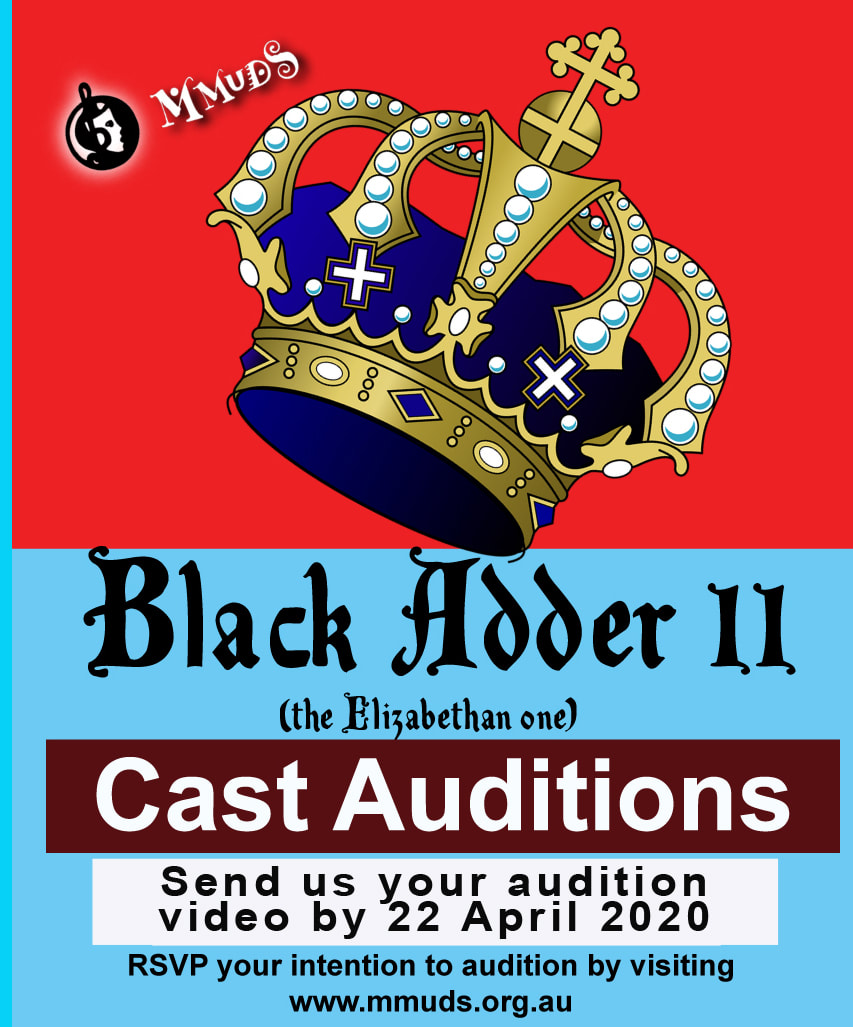 Blackadder Auditions are now being accepted. Send your audition video by 22 April to: secretary@mmuds.org.au

We thought that this would be a great way to keep up spirits and progress this show in a new way.

We are still taking rsvp's for those interested in auditioning for Black Adder II, so feel free to send us an rsvp and we will contact you about auditioning options. However this show is now postponed until September next year but with rehearsals to start in May this year using Zoom software.
Your audition should be based on the script below.
Auditions will be taken by sending a video to secretary@mmuds.org.au
Any questions please contact Director, Karen Pirie, karenpirie@bigpond.com
Please download the script:
Black Adder script
Scenes & cast information

Show Synopsis:
The series is set during the Elizabethan era (1558–1603). The principal character, Edmund, Lord Blackadder, is the great-grandson of the original Black Adder, and is now a member of the London aristocracy. Unlike his forefather, he is both dashing and intelligent, although he is still scheming and cynical in his outlook. The show follows his attempts to win the favour of the childish Queen Elizabeth I. He is aided, and often hindered, by two less-than-intelligent sidekicks, his servant Baldrick and Lord Percy Percy, heir to the Duchy of Northumberland, with whom Blackadder has a grudging friendship.
Throughout the show, Blackadder's chief rival is Lord Melchett, the Queen's pretentious and grovelling Lord Chamberlain. Melchett fears upsetting the Queen, and thus attempts to outdo Blackadder by supporting the Queen in whatever current fad she is interested in. Comic relief in the Court is provided by the Queen's demented former nanny, Nursie.
Bells:
Blackadder gains a new young servant, Bob, and somehow falls for him. When he discovers that Bob is a girl named Kate, he wishes to marry her, much to Queenie's confusion.
Potato:
Attempting to impress the Queen in the wake of Sir Walter Raleigh's return, Blackadder plans to go on a voyage to the Cape Of No Hope, from whence no man has ever returned, and he might marry the Queen if he returns. Blackadder hires the flamboyant Captain Redbeard Rum, who has lost his legs and thinks that every part of Blackadder's body is like a woman's, to accompany them.
Money:
Blackadder is threatened by the baby-eating Bishop of Bath and Wells. If Blackadder doesn't pay back the £1,000 he once borrowed from the Bank of the Black Monks, the Bishop will shove his heated poker up Blackadder's bottom (presumably killing him). With Blackadder having to pay the Queen each time he falls for her stupid tricks, things look bleak for him, until he comes up with a plan so cunning you could brush your teeth with it.