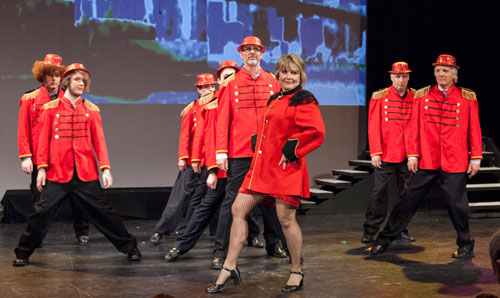 MMuDS is proud to present Sweet Charity, a musical with music by Cy Coleman and lyrics by Dorothy Fields.
The show is a tender, poignant and consistently funny look at the adventures, or rather, misadventures in the ways of love encountered by the gullible and guileless lady known as Charity Hope Valentine. Charity always gives her heart, and her earnings, to the wrong man.... she sings, dances, laughs and cries her way through romance after romance with an endless parade of men.
Despite her job at a seedy dime-a-dance joint, Charity (Judy Dixon) is an incurable optimist. She never stops looking for true love but never seems to look for it in the right places.
We first see her in the company of Charlie, a slime-ball who steals her purse and pushes her into the Central Park pond. Next she stumbles into a one-night stand with Vittorio Vidal (Warren Henningsen), an egotistical movie star. This comes to nothing when Vittorio's contrite girlfriend Ursula (Rebecca Douglas) comes calling, forcing Charity to spend the night hiding behind a screen.
Desperate to escape the dance hall, Charity heads to to the “Y”, to see if there are any night classes that would further her education. Happily, Charity gets into an elevator with Oscar Lindquist (Chris Casey). Charity begins dating Oscar, never telling him of her checkered past or her sordid dance-hall job. Oscar eventually finds out but assures her that it doesn't matter. However, at the engagement party held at the dance hall, Oscar's puritanical streak emerges. He walks out on Charity, leaving her alone and heartbroken once more.
With the help of a group of the ‘Good Fairy’, Charity is able to pick herself up and start living "Hopefully Ever After."
Sweet Charity the musical includes well-known tunes such as "Rhythm of Life", "If They Could See Me Now" and "Big Spender".